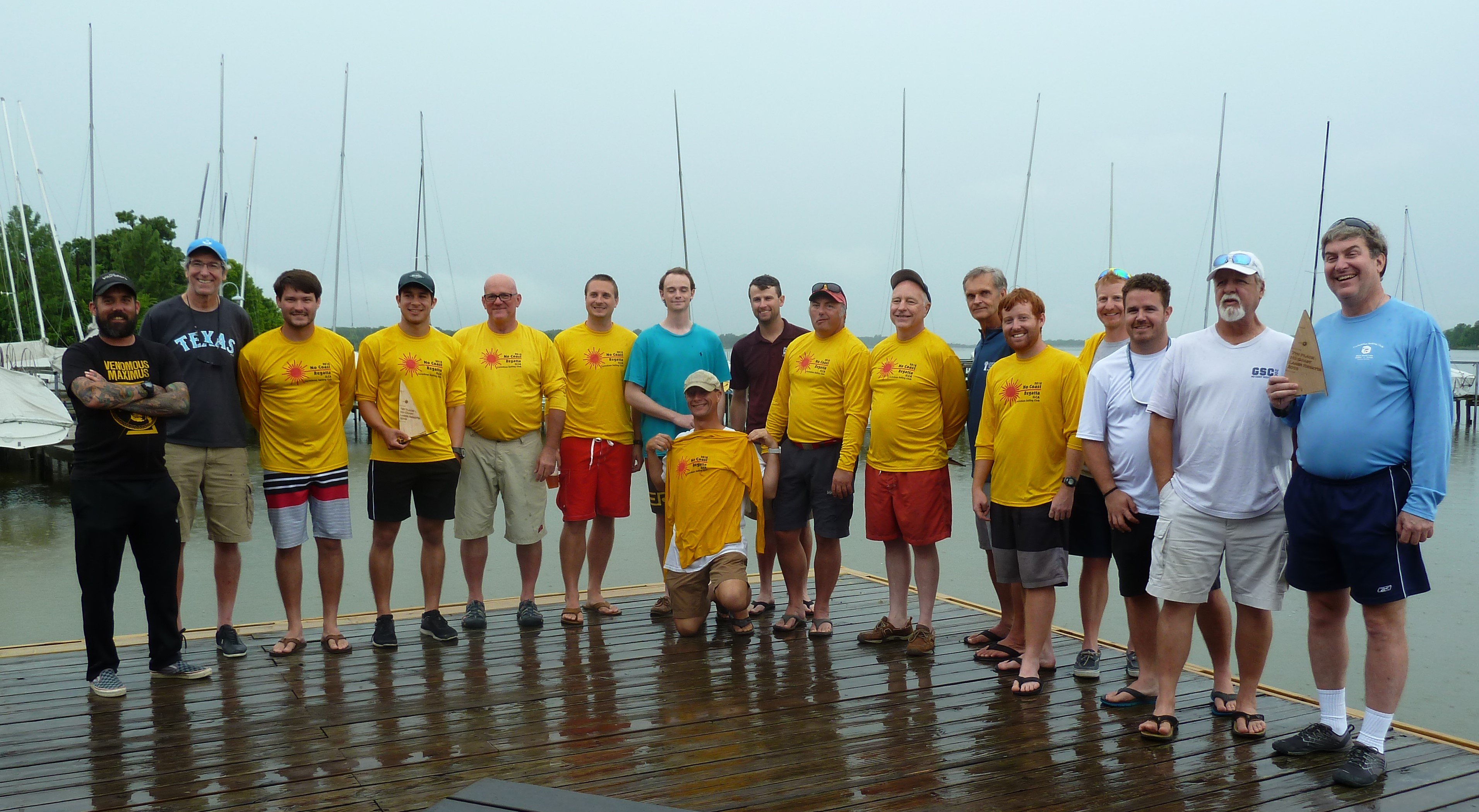 Our event of the year is now concluded, and it was a success!  It was a usual Spring-like day on Saturday with the fan switched on, and Sunday was a weather casualty.  But six races were held, and folks got to enjoy challenging conditions on Saturday followed by some great food.

Twenty three boats entered the event, which was good considering there were three major singlehanded regattas going on in Texas the past weekend, including ours.  We had folks from Oklahoma City, San Antonio, Houston, Newark, and Buffalo join our gang, with sailors ranging in age from 19 to 67.  It was very heartening to see sailors in their 20s and 30s join in with the more “mature” types on hand.  Great fun to meet people from around the area who share a love for our little boats.

The regatta kicked off Friday evening at the VIP with an old fashioned fajita cookout.  Tim worked his grill magic complimented by the nectar of the gods, Blood and Honey on tap.  Fun, tasty, and it set the tone for the regatta — lots of good food!!

Saturday’s forecast called for bright sun, temps in the low 90s, and wind from the south in the 15 to 25 range.  The weather gods delivered on all counts!  Mixed in were some substantial puffs that could deliver a knock out punch whether going to weather or downwind.  Wind was streaky, patchy, and at times shifty.  Bob Gough did his usual masterful job of setting square, fair courses, and with our great volunteers manning several mark boats, we all felt safe.

Around 10 am the fleet set out to the race course to get started, feeling out the conditions.  With the first gun it was quite apparent that one of the young men from Houston, Andres Boccalandro, was going to be tough to beat.  He had the whole package — speed, boat handling, and tactical ability.  But, he had not sailed The Rock before, and it took him a few races to get going.

In the meantime, our Alex, who in usual fashion appeared just in the nick of time to get rigged up, showed he was going to be a force in the heavy going, and motored through the fleet to win the first race!!  Doug P was second, and Andres was fourth as he was caught on the wrong side of a big rightie.

Our Chris B had equipment issues all day, but none worse than having his top section shear off and rip his brand new sail in the first race!  Ugh!  And he broke a tiller extension as well.  But there’s no quit in Chris, and he got to work getting a sail and extension to use in the afternoon.

Doug P won the next two races which saw some incredible planing conditions when the big puffs rolled through.  One had to be on their game to weather these puffs going downwind.  There were a few “Brown Badge of Courage” awards meted out by the lake with White Rock mud atop several masts after the skipper messed up and capsized in some puffs that could only be described as “withering.”

We broke for lunch after three races and tried to get some energy back in our bodies.  Folks ate their choice of sub from Jersey Mike’s Lake Highlands (shout out!), chatted, and drank water during the break.  Lots and lots of water!

The wind machine was still on when we went out for the next group of races.  By this time, Andres had figured out the shifts and put the hammer down.  One observer noted Andres was flatter than the rest, and he was much more stable in the handling the puffs going to weather.  I saw him sheet out a bit at times, but it was mostly in response to waves as opposed to puffs.  He kept that boat on the perfect edge, and it was a joy to behold.

Our Eric, who we all know is a strong sailor, put his best foot forward and battled Andres in race five.  I didn’t witness it myself, but I heard it was quite the back and forth tussle.  Andres pulled a bit of a lead by the end of the race, and Eric took to ensuring he got second; however, he was not able to pull off a clean tack, and dropped from two to six as a result.  But he knows he had the chops to take it to Andres!

Griffin also got his mojo going after lunch when he followed Fred Scroth’s advice to “pull the vang and cunningham so hard that it hurts!”  Classic Fred, and it worked for Griffin!

Tim and Alex swapped positions in mistakes — Tim leaving his drain plug out in the morning, and Alex leaving his out in the afternoon.  It’s easy to do, and we have all done it before.  It particularly happens when a regatta rolls around as we get out of our normal rhythm when rigging the boat.

At the end of the sixth race, Bob sent the fleet in. It was obvious the wind was taking its toll on the fleet. Awaiting them was delicious food, including brisket, mac and cheese, green beans, and cole slaw.  It was quite the spread, and lots of food disappeared that night!

The forecast for Sunday called for a 10% chance for rain, but very light, shifty wind.  As the sailors arrived at the club to partake of the breakfast tacos and coffee, they were greeted by dark skies that looked downright threatening.  That wasn’t in the forecast!

Turns out there was a massive storm cell stretching from San Antonio to Denton, containing a lot of rain and lightning.  As it was obvious we wouldn’t get our remaining races in by noon, Bob called it an event at 11.

More food(!) was followed by trophies and a group picture.  Awards were given to 10th, and there were a few special prizes given, too.  Jim H. got an award for “First Big Event,” and Chris B won the “Best Excuses” award for having a personal black cloud over his head on Saturday.  All in good fun.

Interesting that the age of the sailors was bracketed by first place sailor Andres (19) and second place sailor Doug (67).  That’s quite a spread!!

This regatta also marked Bruce Moore’s last big event at White Rock as a resident of the D/FW area as he and Kristen prepare to move to the colder climes of Michigan.  We also said good bye to Christof as he heads up to Michigan as well for his work.  John Oliver will well and  truly cut the cord soon and move to Panama.  We will miss y’all!  Don’t be strangers.

If I missed you, please know the fleet REALLY appreciated your support!