Nine of our group sailed in fantastic conditions last evening, including John E., Forest, Chris, Cullen, Griffin, Jack, Porter, Eric Ro., and Mike R.  We also had new to our fleet Robert out sailing a radial getting up to speed.  Helping run the races were Jack’s daughters, Tim, Brixton, Tiller, Brig, and the oh-so-officious Alex as the Principal Race Officer.

Wind was really consistent in strength all evening, but there were big shifts.  Even with the big shifts, racing was tight!!  Five races were held, the first a W2, and the remainder were W1s.  There was enough air to get a work out, that is for sure.

The fleet was tightly bunched throughout the evening, which made it fun for the spectators as well as the sailors.  There were a lot of close mark roundings, some major duels downwind, and trees!  Trees?  Yep.  The submerged kind.  Alas, three of our guys found pretty substantial wood.  But none of the damage was terminal, so all good on that front.

We had a bit of excitement before racing started as the Dallas Fire Rescue Team showed up to investigate a capsize.  Turns out Chris and Brixton were sailing together before we got out there, and a death roll was viewed from the shore by a concerned citizen.  The citizen called the Fire Department which dispatched a hot racing boat to interrogate Tim about the situation.  People just don’t get that a Laser can turn over and be righted.  But the funny thing was Brixton was ready for her daddy to death roll during a race! 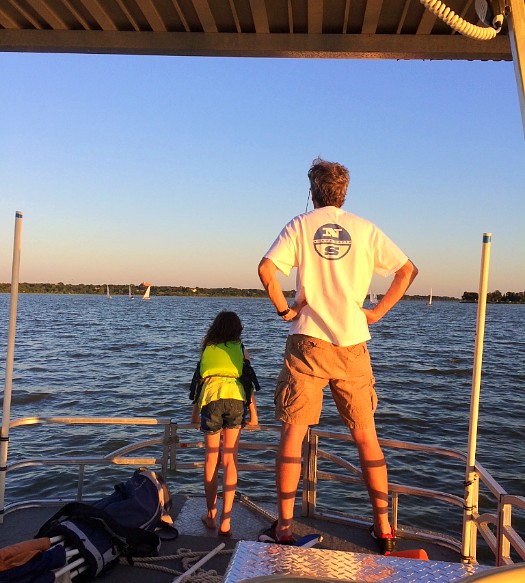 The Laser Nationals at HYC are upon us.  I believe Chris will be our representative.  He has been sailing, so good luck to him!

Not Lasers, but this weekend will be the Aero Viridian Regatta.  Several of our group will be visiting Jack at his local club.

The club will be a fun fest in a week!  Besides the usual fun stuff — band, food, beer, and gabbing, the Young Wizard has organized an Opti Regatta in lieu of normal Laser Wednesday Night Racing.  He has a hard cap of 18 entrants, and there are but a few spots remaining, so if that floats your boat (and some of us will be lower in the water than others!), sign up!!  Long range forecast shows some wind.

If you can help run races, please contact Greg Wallace who, with John E., are RC, need another volunteer.

Last weekend several of our fleet went to the Seabrook Sailing Club’s annual Summer Solstice Regatta, and by all accounts, they had a blast!  Good wind, great friends, some adult libations (a few over-consumed (ask for details!!)), and a group adventure.  What follows is Griffin’s account.

Dallas Sailors made their way to he a Seabrook Summer Solstice on Galveston Bay this past weekend to sail in exceptional conditions against some of the top sailors in Texas. In attendance from DLF were Griffin O, Alex G, Tim P, Christof B, Eric R. On day 1  conditions were winds from the south at 15-20 with 1-3 foot waves which provided some very exciting reaches and downwind legs offered by the Olympic courses. Wipeouts were a plenty across the fleet, with those able to sail a clean race all but guaranteed a top half finish. Day 2 was much the same with two more Olympic courses with some more drastic shifts that made no lead guaranteed.

There were a few incidents, however, with Christof cutting his leg on day one which put him out of commission for the rest of the regatta. (Infections are to be avoided at all cost on Galveston bay). Alex showed up with a tiller extension that looked like a banana and despite calls from competitors to find a better one, he proceeded to sail out and break it in half on the last leg of the first race!! Lastly Griffin was sailing out to the racecourse on day two when his gudgoen fell off. Thankfully, he was able to sail in and fix the issue before making it back out to make the second start with 3 minutes to spare! Top sailors from Dallas were Griffin Orr, Alex Goldberg, and Eric  Roman in 4th, 6th, and 10th respectively.

Griffin is organizing a group to attend the Colorado Laser Championship August 11 and 12. See his FB group for more details, but there should be 30 boats!